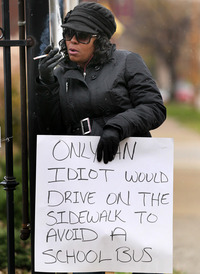 I’m making a judgment call here which is against everything that I have been taught and try my best to avoid doing but there are times when the things that people do absolutely call into question their own sound judgment and reason. When children make questionable decisions it’s a no-brainer – they are children who in most cases lack a certain amount of rationale when dealing with social situations. But when a grown adult who should know better completely ignores the rules, deliberately breaks the law and scoffs at the mere thought of upholding a law that hampers them is ludicrous.

What further infuriates me is when a person who breaks a law shows a belligerent lack of remorse. Shena Hardin of Cleveland, OH is a prime example of this type of entitled, overindulgent behavior that has become far too common in our society today. In a moment of thoughtlessness, Hardin decided that rather than wait for a special needs bus to continue on its way, she drove on the sidewalk and went on her merry way.

Hardin was brought before Cleveland Municipal Court Judge Pinkey S. Carr who sentenced her to 30-days without driving privileges, a $250 fine and in a very odd but altogether awesome twist, required Hardin to stand on the street with a sign that read, “Only an idiot would drive on the sidewalk to avoid a school bus.” Brilliant!

This was not a witch hunt. This was not a case filled with gray areas that allow lawyers the ability to shoot holes in the legal system to find a backdoor in the hopes that a client can skirt or outsmart the law. This was a clear cut case of someone who does not feel that the law applies to them.

Hardin served her two-day ‘sentence’ on the street but reluctantly and without a single ounce of remorse. In fact, when she was asked repeatedly by the media for a comment she acted put out and her demeanor was combative and pugnacious.

Here something else to consider: When I refer to adults knowing better it is a general statement that may not apply to all of us “Normal-Joe and Normal-Jane” types who have limited exposure to the law. But when someone who is regularly exposed to the inner-workings of the law they should be fully aware of the consequences that their law-breaking actions might entail. Any law abiding citizen knows that you don’t drive on the sidewalk. But someone like Hardin who is in fact employed by the Cleveland State University Police Department should very well know that there are steep penalties for breaking the law. This is why I think Hardin did it in the first place –she probably thought that the law does not apply to her because she knows the people who are enforcing the law and therefore she would get off scot-free.

Unfortunately for Hardin she lost in the court of public opinion before the actual law intervened. Worse, she had people there to defend her actions. Are you serious? It’s too harsh of a punishment? Try telling that to the parent of a child who is mowed down on the street by some imbecile like Hardin who is more interested in getting to where they need to be rather than thinking about the lasting effects and the calamitous consequences of their actions. Stop defending people who do stupid things and start holding them responsible for their misdeeds. Standing on the side of a road with sign that basically says, “I’m an idiot” should be the least of Hardin’s worries and yet, when all is said and done she will be back behind her desk talking about the injustice and humiliation of it all when it appears that it never crossed her mind that what she was doing was wrong.

Is our society so desensitized to common sense and decency that we want to defend a person who breaks the law rather than the people who are trying to uphold it? Something is fundamentally wrong with this kind of thinking and its subsequent behavior.

5 thoughts on “You ARE an Idiot”