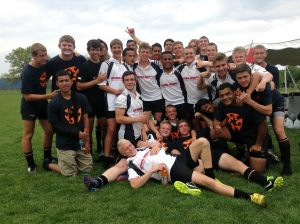 From the opening whistle it appeared that United was intent on leaving Indiana with a national championship. Led by their All-American captain Zach Webber the boys from Alpine, Utah would not be denied but they had to put every ounce of muscle, grit, determination and blood on the line for the coveted hardware.

Just a year ago Cathedral-Catholic had marched in try after try and left United gassed and flabbergasted in front of a home crowd at Rio Tinto Stadium in Sandy, Utah. This time around however it was Cathedral who were left wondering how to crack United’s impenetrable defense even after Cathedral scored the first try. Suddenly it seemed like United was destined to face another defeat by a very strong, athletic and scrappy young Cathedral side.

Not to be outdone, United gathered themselves, drew a deep breath and after a number of crafty moves by the backline and a heads up play by their rampaging forwards, No. 8 Austin Young scored a try just outside of the posts that was converted by fullback Connor Morris.

The celebration was short lived by United as Cathedral rushed to recover the restart that was knocked on just outside United’s 22-metre line. Cathedral again pushed forward but after another great defensive stand by United on no less than twelve phases by Cathedral, the referee awarded a penalty to United for hands in the ruck.

United kicked for touch and the back and forth affair began with both teams utilizing excellent kicking. Morris seemed to have the slight edge with superior support play from his wings, Porter Thomas and Folo Ulukivaiola. As Cathedral hurried to put up an organized defense, United’s forwards went right back to work, pushing past the gain line on every pick and go until lock Matt Mikulecky crossed over the tryline for a brilliant and well deserved try for United. The try was unconverted but United went into halftime with confidence with a 12-5 lead despite a yellow card to Junior Lagaaia who seemed to be targeted by the referee from the start with repeated offences.

At the start of the second half United was eager to put more points on the board as United captain Webber threw a nifty dummy, carved up the defense and raced in for another try to move the score to 17-5 after the missed conversion.

Cathedral would not go down without a fight as they again rushed the restart and were awarded a penalty when United did not release the ball after contact. Once again, United’s defense was put to the test as Cathedral ran phase after phase until finally a bit of daylight opened up just enough outside the breakdown for Cathedral’s No. 5 to slide in and touch it down. The try was unconverted but Cathedral seemed fired up and eager to put the pressure back on United.

But it was United that would capitalize after the game seemed to be at a deadlock with neither team willing to concede any points. After a knock on just outside of their own 22-metres, Cathedral packed down for a scrum but United was able to steal the put-in and United scrumhalf Kingston Matua skipped a pass to his All-American backline as Webber and outside centre Calvin Whiting charged down the ill prepared and shocked Cathedral defense as Whiting waltzed in for the easy try below the posts. Morris converted and the score of 24-10 seemed insurmountable for Cathedral at that point.

Once again, United dug deep defensively to stymie the always bulldozing and pesky Cathedral offense but United held up the repeated attempts by Cathedral to crack the try line until the ref blew the whistle for full-time to a very jubilant United team and their zealous fans who had traveled far to witness another classic championship game.

Congratulations United Rugby Club on another stellar effort to win another national title.