A lesson in humility and necessity 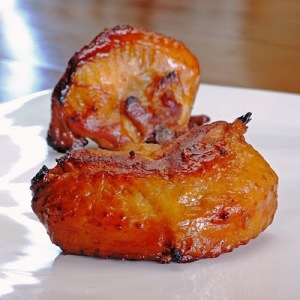 “What is that,” we all asked in unison as my mother plopped a slippery bag from the market into the sink. Still new to Samoa, we had not learned as yet to reserve our questions about the contents of our evening meal until after consumption when our bellies were full and it no longer mattered what poor animal from the sea or the rain forests had landed on our plates.

As typical American teens of that day we had been thoroughly chastised repeatedly by our parents to be grateful to have a meal but ‘ew gross’ was still the less than complimentary ingratitude that my parents received from our thankless lips every evening before our meal was cooked, eaten and even after our meal when our intestines were trying to sort out whatever it was we had ingested.

“It’s chicken and turkey,” mom announced to which there was a chorus of praise and exultation as the ungrateful and much maligned and unruly American children danced around the stove like characters from Lord of the Flies on a deserted island, our faces glowing in the eerie light of a fire.

“Where’s the chicken and turkey?”

“That is chicken and turkey. It’s just not what you’re used to.”

We looked at what appeared to be chicken bones stripped of most of the meat and what we came to know as si’usi’u pipi (turkey tails). Our hearts sank. Later we were told that these undesirable castoffs were sent to Samoa for consumption because they were unwanted in places like the United States, New Zealand and Australia. They became a staple in the Samoan diet in the late 80’s and although pakua moa (chicken backs) and si’usi’u pipi have for the most part been banned, turkey tail has made a comeback and remains an indispensable part of a Samoan course on special occasions.

Notwithstanding the unpleasant origins of what was then a revolting food item, like most families in Samoa we made the most of the experience. My mother and many like her found creative ways to cook pakua moa and si’usi’u pipi. I don’t know that I ever became a huge fan of the things but I do know that it was life sustaining for us when meat was scarce or expensive.

There were of course times when we caught whiff of the stuff before its odor was masked with onions, curry and other spices and the protests began in earnest. Never before had the words, “Can we just eat pilikaki (mackerel) instead?” imploringly rolled from my tongue except on the days when pakua moa or si’usi’u pipi were the main course. But in time the protests ceased as the need for sustenance outweighed the desire for farm raised chicken, beef and lamb. The uproar was replaced by gratitude for a good meal cooked with love.

They say that ‘necessity is the mother of all invention’ and my mother really had be inventive back in those days in Samoa. Her culinary skills were put to the test on many occasions in order to satisfy the palates and the appetites of her hungry brood. Meanwhile, as I would later learn on visits to family and friends outside mostly outside of the Apia area, there were families who were barely scrapping together enough to feed their families more than just a meager cup of miki (salted and spiced cold coconut milk with onion) and a few slices of breadfruit. And yet, in those homes I rarely heard a complaint for a lack of food. In those homes I would sit in contemplation as the last of the miki and breadfruit disappeared or was cleared away, wondering about pakua moa and si’usi’u pipi and what essentially amounted to a feast for a king for some of those people.

Over the years I’ve often reflected on those faraway days, sitting down to dinner with my family and being so grateful for any meal that was prepared for us using fresh produce grown on our land; for fish, poultry and meat that was pulled fresh from the ocean or raised near our home. Ours was a simple life of subsistence not of affluence. It was a life of hard work, diligence and modesty. It was a life of respect and gratitude for all things including the things that we sometimes spurned as trivial, beneath us and unworthy for consumption.

Those days taught me a lot about life and more about myself. The lowly pakua moa and the modest si’usi’u pipi became a startling but necessary menu item in our home and a lesson in humility for American kids whose drive-thru mentality was shockingly and necessarily replaced by gratitude.